5 Public Transportation Challenges - And Their Solutions! 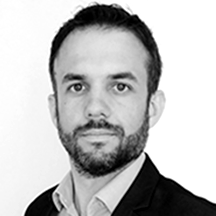 Posted by Mathieu Michel
Find me on: LinkedIn

Public transport is more than simply moving people from A to B. A lot of people rely on public transport in their day-to-day lives, and any transportation problems can have a great impact on them.

Take Londoners, for example. The average person in London spends approximately 74 minutes on public transport every single day. That’s more than 8 hours a week! This can negatively affect their everyday life with additional stress and tiredness at work, impacting productivity, but also impacting their quality of sleep and family life. 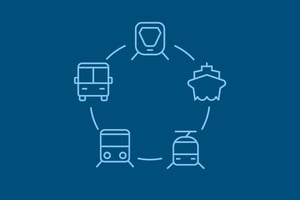 With existing technology, we have the means to reduce the environmental impact of public transport (both the contribution to carbon and air quality emissions, and also noise levels). The changes simply need to be implemented, and some cities are already making a start.

Edinburgh is making transport more sustainable by increasing their number of electric, hybrid, and lower emissions buses. Locals are also encouraged to walk and cycle more, with the city council investing 10% of their transport budget towards cycling provisions. The positive effects of this are already starting to be felt, with over 11,700 bike journeys taking place daily last year.

Both of these initiatives are part of a larger plan to make Edinburgh a more sustainable, healthy, and safe city in the future.

Germany is also working towards making transport more sustainable. Last year, the world’s first zero emission trains were rolled out in the cities of Cuxhaven, Bremerhaven, Bremervoerde, and Buxtehude. The trains, which are entirely powered by hydrogen, are set to serve around 2 million people.

Local transport authorities should also aim to collaborate with technology suppliers that comply with ISO 14001 norms that specify the requirements for an environmental management system that the organization can use to enhance its environmental performance.

Customers of today are accustomed to instant gratification and having the world at their fingertips, thanks to smartphones. According to The Telegraph, the average person checks their smartphone every 12 minutes, and one in five adults spends up to 40 hours per week online. With technology so integrated in their lives, today’s customers expect more convenience, more comfort, and more personalisation. Public transport needs to update to adapt and meet these needs.

EMV solutions integrated into automatic fare collection gates are also now widely used in many countries, making fare payment simple and convenient for passengers. This improves convenience for customers because it is one less ticket for them to carry and potentially lose. In addition, transportation companies can use the data gathered from smartphone use to learn more about their customers and improve the experience accordingly.

Interactive transport apps can also help improve the customer journey by allowing them to check-in in real time for the next train, bus or subway. They can also view the best itineraries to reach their final destination, use geolocation to view facilities available at each station, and receive alerts in case of any service disruption.

Automatic fare collection gates can also help to control and predict the passenger traffic and improve quality of service during rush hours.

Auckland Transport is looking to take this even further by ‘gamifying’ public transport to make it more enjoyable for customers.

Public transport is an industry with many moving parts and, as such, it is difficult to organise with efficiency. One error or delay at a single part of the chain, for example a driver absence, can cause a ripple effect of problems down the line. According to Network Rail, around 60% of passenger delays are caused by rail companies. The remainder of delays are caused by vandalism, weather, and trespassing.

Yes, this is the same solution as above! By using smartphones and other technology to collect data, transport companies will be able to organise timetables with more efficiency.

Data can uncover key information, such as peak times and flow rates (the number of people passing through the automatic fare collection gates at a given time), to allow transport companies to plan accordingly. For example, running more trains in peak times and reducing transport in downtimes, to save on energy and costs.

Rail companies are also now starting to create apps that inform commuters of any delays and cancellations. A great example comes from Virgin Trains. Not only does their free app provide users with live departure information, it also works as a booking and entertainment platform, so customers can watch movies on the go! (This is also another great example of how to improve the customer experience!)

Fare evasion costs transport companies millions of pounds. According to the BBC, fare evasion costs Transport for London (TFL) £100 million every year. And, for the French RATP, “Fraud accounts for 171 million euros in lost revenue every year, the equivalent of 23 metro trains or 475 buses”.

But it’s not just London that is suffering. Fare evasion is a worldwide problem for transport companies. In Canada, the Toronto Transit Commission (TTC) reportedly lost $61 million because of fare evasion in 2018. Similarly, 18% of people in Berlin “sometimes ride without a ticket.” With ticket prices such a large and crucial part of revenue collection for transportation companies, fraud numbers need to be drastically reduced if services are to improve in the future.

This has a direct impact on the replacement of rolling stock, transport services and passenger comfort. In a RATP-CSA survey conducted in March 2015, 77% of respondents said they were irritated by fraud. When the level of discomfort is higher than the passengers’ acceptance level, public transport becomes less attractive to them.

Automatic fare collection gates, like those seen in most airports, will only open when triggered by an action. In train stations, this action would be presenting a valid ticket. Without a valid ticket, the gates will not open and so fraud will be reduced.

On top that, barriers also reduce temptation for fraudsters because there’s more risk of them being caught without a ticket. You can find out more about automatic fare collection gates here.

Congestion affects everyone. At a wider level, it’s bad for the environment and costs the economy a huge amount of money each year. It’s been reported that congestion cost the UK economy £8bn in 2018. That’s an average of £1,300 per driver! On top of the cost is also the reduced productivity and increase in pollution that this causes to the area.

Congestion impacts people on an individual level, too. Vehicle exhaust fumes have been linked to respiratory problems, especially in children. And being stuck in traffic increases stress levels. According to a study by The Los Angeles Times, people are more concerned about traffic than about finances, housing, and even personal safety.

A smart city is one that is integrated with technology. Everyday objects, from trash cans to traffic lights, can be fitted with sensors that connect them to the internet (known as the ‘internet of things’ or IoT). These sensors collect and share data so that the entire city can be run more efficiently.

If a city is run more efficiently, then more people will be inclined to use public transport because it will be reliable - and hopefully be more enjoyable to use! This will reduce the amount of cars on the road, creating a domino effect that means reduced pollution, reduced stress, and happier people! Take a look at this GIF that shows how different the world would look if more of us used public transport:

Some cities are already making this a reality! In Singapore, congestion has been dramatically reduced thanks to the implementation of road sensors, phased traffic lights, and smart parking. It’s no wonder that Singapore was recently crowned the smartest city on Earth! 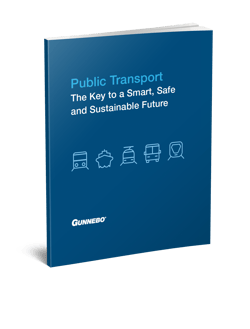 For more information about the role that public transport can play in developing a brighter, more sustainable future for everyone, download our free eBook - Mass Transit: The Key to a Smart, Safe and Sustainable Future